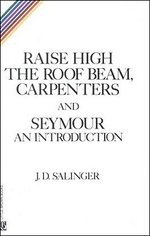 
Внимание! Книга на английском языке! Whatever their differences in mood or effect, they are both very much concerned with Seymour Glass, who is the main character in my still-uncompleted series about the Glass family. It struck me that they had better be collected together, if not deliberately paired off, in something of a hurry, if I mean them to avoid unduly or undesirably close contact with new material in the series. There is only my word for it, granted, but I have several new Glass stories coming along? waxing, dilating? each in its own way, but I suspect the less said about them, in mixed company, the better. Oddly, the joys and satisfactions of working on the Glass family peculiarly increase and deepen for me with the years. I can't say why, though. Not, at least, outside the casino proper of my fiction.